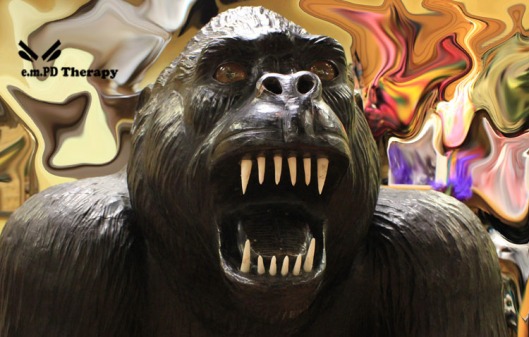 One of the lingering side effects of the stroke was that this man – a man who was once the epitome of tact and protocol, suddenly developed a rather disconcerting habit of saying exactly what he thought of things – and people, and what he thought was heavily dependent on his mood at the time. I openly acknowledge that I was a little jealous that he got a free pass when he did this, because of the stroke and all, so I tried it (not the stroke part). We’re close like that. His pain – my pain. His pass – my pass.

Needless to say, I dived right in, feet first. My conversations became very efficient. Snip-snip-done. No more wracking my brain for the right thing to say in a given situation, just say what I really wanted to say, and move on. Who knew that speaking your mind could be so cathartic and liberating? When someone had the audacity to question my behavior I would explain that it was allowed, because my brother had suffered a stroke. I’m not quite sure why, but it didn’t work as well for me as it did for him. Nobody was willing to buy into my assertion that our bond, and his stroke, gave me license to share in his new personality traits. I soon realized that I would have to find another way to deal with my personal grump-monster, and own it. In order to do that, I would have to know what “it” was.

Discovering My Grump Monster’s Identity
Discovery is a process. My initial path to discovery was neither formal nor scientific. It came as a result of paying close attention to “me”, and making note of who I am. Over time, I noticed that there were recurring themes in my attitude toward life, and dealing with the people who entered my life’s bubble – my space. Most of the themes had names, and appeared to be reasonable explanations for why I do the things I do, and why I am who I am. But there was one in particular that was yet to be named. It was an elusive constant, always showing up, but not really tangible.

True to the times we were living in, I figured hormones would be the most obvious culprit. I took a long, hard look at the messy monthly marauders that throw everything out of whack. I vaguely recall a popular T-shirt that proclaimed something along the lines of, “I have PMS and a gun. Any questions?” Interesting, but not quite the answer. Being hormonal was only an occasional contributor to the problem, and didn’t fully explain the rest of my grumpy behavior.

(Note to self: It has been suggested that men experience similar hormonal cycles, just not as messy. Need to look into this.)

Monthly personality issues were one thing, but the daily issue that I found myself dealing with – that elusive constant – was an animal of a different breed. I’m talking about my tendency to be very anti-social upon awakening in the wee hours of the morning. And by “wee” I mean anything before 10:00 a.m. There, I said it. When I have to wake up at six in the morning to get ready for my day, well, let’s just say it takes time and effort to get my attitude adjusted and ready to participate in social interactions.

This is a snapshot of that particular routine: I startle and reach blindly for the snooze button when the alarm blasts – it’s about an hour or so before the time I need to leave the house in order to arrive in a timely fashion for whatever event demands my presence. I say an hour or so because the clock is set to run at least ten to fifteen minutes ahead of reality. It’s a psychology thing, or maybe a psycho thing. Opening the tiniest slit I can manage in my eyelid curtain, I glare at the clock, as if I’m actually shocked the alarm sounded at the agreed upon time that I had set, just moments before calling it a night. The curtain closes, and I just lay there, knowing the alarm will blast again in nine minutes. Alarm. Snooze. Repeat. In between alarms I am thinking, and giving myself a little pep talk. I also say a little prayer before my feet ever hit the floor – I’m thankful for another day of life, and I don’t want to hurt anybody. When I finally roll out of bed, I make a beeline for the bathroom. I have found that a really long, hot shower does wonders for my personality, and I indulge for the sake of others. This is my refuge, my momentary sanctuary from social life.

I was actually in the shower when I had my Aha! moment. Like any great scientist, I felt that I had earned the right to name my little discovery. Grump Monster certainly didn’t fit the bill for something that could someday become the subject of academic study and animated discussion, perhaps even the cover story of a renowned medical journal. Standing there, in that steaming hot shower, I realized – I have early morning Personality Disorder. I have e.m.PD.

Finally! I had a name for the elusive constant, a name for the recurrent theme that had played a significant role in my attitude towards life, and people, for as long as I could remember. I couldn’t wait to test my theory, and the new name, on friends and family. I could finally tell them that this is a real condition – very complex, and very real. The most striking characteristic of e.m.PD is an aversion, of varying degree, to any type of social interaction when awakened during the early morning hours. For me, I’m fairly sociable after 10:00 a.m. If I wake up before that, I need time alone to get my personality adjusted. Right around 2:00 p.m. everything starts humming and I’m kicking it into high gear. My creativity tends to peak between the hours of 6:00 p.m. and 2:00 a.m., and life is good. Eventually, I go to bed, knowing full well that the e.m. hours are coming. Again.